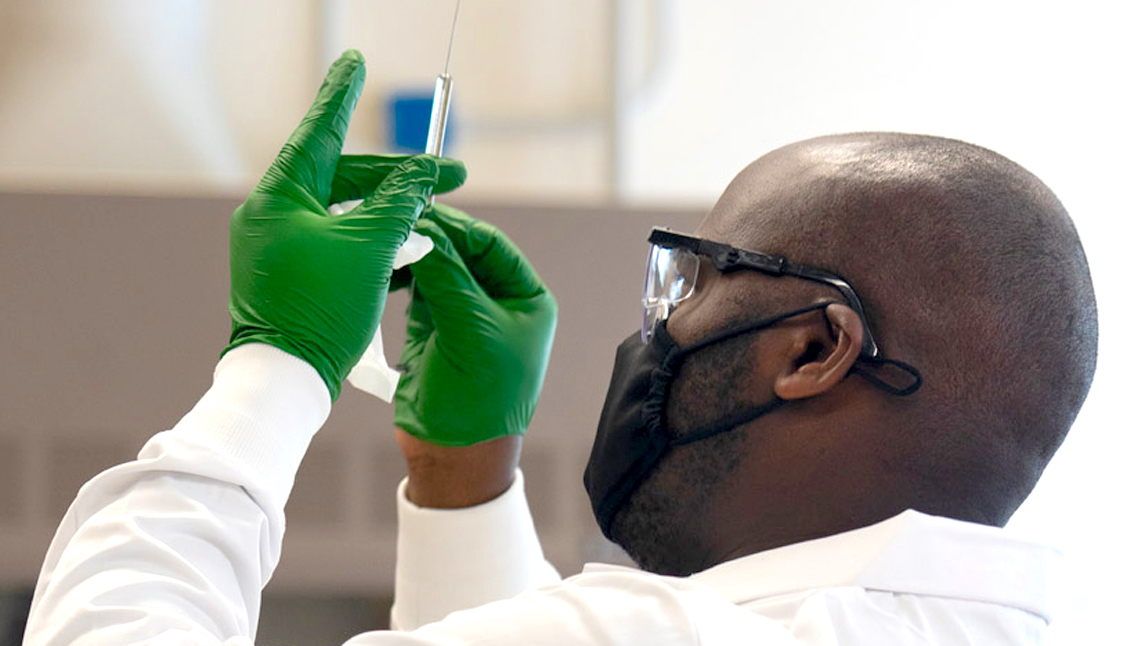 In their early experiments, the team observed that sweet annie tea could treat malaria in mice, but had difficulty reproducing their findings. Seeking a resolution, Dr. Tu studied a Chinese text called “The Handbook of Prescriptions of Emergency Treatments,” written in 340 by Ge Hong. In it, Hong recommended a cold (rather than hot) water extraction, and when the team adjusted their experiments accordingly, they found that they could get consistent results. The product of Dr. Tu’s research continues to save millions of lives, mostly in South China, Southeast Asia, Africa, and South America.

Inspired by stories such as that of Dr. Tu, the Cech research group at UNC Greensboro seeks to uncover new ways to treat infections using molecules from plants and fungi.

Cech’s inspiration for this work is personal. “I grew up on a farm in an alternative (ok – hippie) community in southern Oregon,” she says. “As a student of the natural world, I was really intrigued by the beauty of plants and also by the stories I heard about how they could work to treat disease.”

A faculty member at UNC Greensboro since 2001, Dr. Cech has made the study of plants a major part of her scientific research. Her group attempts to discern which of the anecdotal reports regarding medicinal efficacy of plant-based medicines are accurate, with the goal of coming up with new ways to cure disease.

“This research has turned out to be far more challenging than I had imagined it would be,” says Cech, who has been working in this area for nearly 20 years. “I guess it’s like anything – the closer you look, the more complicated it becomes.”

A hurdle that the Cech group quickly encountered in researching plant medicines is that that plants are often used for treating disease in teas or powders that contain thousands of different molecules. The typical scientific approach to address this problem is to isolate the molecules from the mixtures and test them alone for their usefulness in treating disease. In many cases, this approach is highly effective. Artemisinin, for example, was discovered this way, as was the anti-cancer therapy taxol. Sometimes, however, the single isolated molecule does not behave in the same way alone as it would in a mixture.

Cech notes that some research suggests that a tea from the sweet wormwood plant can be even more effective against malaria than isolated artemisinin. Currently, the methods available to scientists to study how complex mixtures of molecules might work together against a disease are insufficient. This is the problem that Cech, her students, and their collaborators are attempting to solve.

In July 2020, research in the Cech group got a major boost for this work with funding for the “Center for High Throughput Functional Annotation of Natural Products (HiFAN),” a 5-year, $5 million project being conducted collaboratively with the Cech group and those of Roger Linington at Simon Fraser University, John MacMillan at the University of California Santa Cruz, and Olav Kvalheim at the University of Bergen in Norway.

HiFAN is one of only a handful of projects that comprise the prestigious CARBON program at the National Institutes of Health (NIH).

“This program is an exciting opportunity to advance the study of complex natural products and to build transdisciplinary research capacity within the new centers and among the greater natural products research community,” explained Dr. Joseph M. Betz, acting director of the NIH Office of Dietary Supplements.

Cech is particularly happy to be a part of the CARBON program given that the success came on the heels of prior failure. The Cech group applied for funding from the program when it was launched five years ago, but the funding went instead to the team of MacMillan and Linington, who at the time were not collaborating with the Cech group.

“I told John and Roger there’s nobody I’d rather lose out to,” says Cech, referring to her first failed CARBON proposal. “They’re such great scientists doing really awesome work.” She adds, “I was really honored when they asked us to join them on the renewal application of HiFAN. It’s such great validation of the work we’ve been doing here at UNCG and it’s going to be possible to accomplish even more by collaborating with Roger and John.”

Importantly, the new funding for the Cech group will not only enable advances in research but provides the opportunity to hire postdoctoral research associates who enrich the research program at UNC Greensboro and bring new expertise. One of these scientists is Dr. Joëlle Houriet, who received her PhD from the University of Geneva and joined the Cech group as a postdoc in February.

“For me it’s a privilege to work on projects that make sense to me, but hopefully also to our society,” says Houriet. “To learn together is what is very important for me, to still be curious about everything.”

Preston Manwill, a postdoctoral researcher from The Ohio State University, was also recently recruited to UNCG to take part in the HiFAN project.

“One thing that I love about being part of a research group,” he says, “is that there are other people I can talk about plant chemistry with. Not everybody I meet on the street wants to hear about the chemistry of plants, surprisingly. It’s nice having people who are excited about that too.”

Manwill and Houriet are part of a dynamic group of eighteen that includes postdocs, graduate students, and undergraduates who work in the Cech laboratory. The addition of their expertise to the team helps to advance the training of undergraduates, who work alongside them to solve scientific questions. Undergraduate student Samarth Khasakia (BS ’21), an international student from India, comments on what he has gained from participation in research. “Whatever we are reading in the books, whatever we are learning, we have to experience it through exposure,” he says. “It’s hands-on experience. That’s how we learn.”

Dahlia Porter (BS ’21), who comes to UNCG from a small town in North Carolina, has a similar take on the importance of her training as part of the Cech group. “It’s really important for me to be in a lab, because reading about stuff in books is all fine and great, but at a certain point it just becomes hard to visualize,” she says. “It just gives you that extra edge when you’re learning and you come out a little more well-rounded.”

As Cech reflects on this most recent funding from the National Institutes of Health, she says that the greatest emotion she experiences is relief. “Many years ago when I told my PhD mentor that I wanted to pursue a career as a research scientist in academia, he warned me that ‘you’re always one grant rejection away from losing funding,’” she says. “He was right. The struggle to remain funded in research is real and I lose a lot of sleep wondering if we’ll have enough funds to pay our people. Today, I’m just so grateful to have this funding. We live to die another day.”