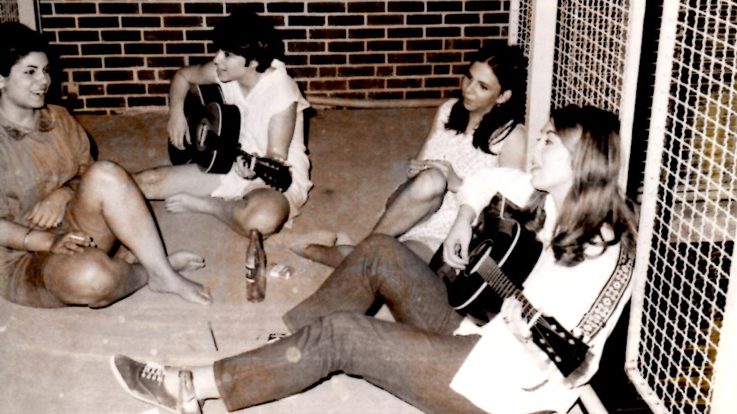 By the time Emmylou Harris arrived at UNCG in 1965, a tiny bit of a folk scene seemed to be emerging on campus. An increasing number of UNCG students were playing guitar and singing, in the era of Joan Baez, Bob Dylan, Odetta, the Seegers and Peter, Paul, and Mary.

Marty Barber, who also arrived in 1965, always loved music. “I played guitar,” she says. “I could play enough to accompany somebody else singing. I could play rhythm.”

Emmylou Harris was one student that she knew. “She was in my dorm.” That was Bailey Residence Hall. All the halls on the Quad were freshmen-only in that era, she explains.

“I remember she would practice singing with this guy who would come up from Chapel Hill. His name was Mike Williams, and his sister was a Girl Scout that I knew.” Barber had grown up a few miles from the Williamses, in neighborhoods off Friendly Avenue.

“He would come up on his motorcycle with his guitar strapped onto the motorcycle, and they would sit in the parlor of Bailey and practice,” Barber recalls.

“Whenever he would come up, they would practice and everybody would kind of hang around, listening, trying not to be too obvious.”

What was Emmylou like? “Very demure, quiet, studious, but more into the drama. Not drama in her life, but drama as far as acting, singing, and things like that. She was just a really nice girl. She didn’t stand out – nor did any of the other people. But she was a bit more interesting, looking back on it.”

She still has a get-well card with great signatures from some classmates, Harris included.

Barber has continued to play. She even still has some of those old 45s from the Elliott Hall jukebox. She would ask for them when they were regularly replaced for fresh singles. She simply loves music. And she is looking forward to Friday’s big concert. She notes it’s the first time her classmate Emmylou Harris has played on campus since she was a student. Barber has tickets on the very front row.

The following is a tale of upstairs, downstairs. Envision a two-story apartment building on Spring Garden. “A block west of Yum Yum.”

Fred and Susan Chappell, along with their young son, lived on the first floor.

Emmylou Harris lived on the floor above them – she and apartment-mate Gay Bland. Bland sometimes baby-sat the Chappells’ son.

Fred Chappell had joined the University in 1964. This was 1965-66. He was years away from becoming world-renowned as an author, recipient of the Bollingen Prize, the O. Mac Gardner Award, and the French Academy’s Prix de Meilleur des Lettres Étranger. She was years away from being a chart-topping music star.

“We talked together some,” he recalled in a phone interview recently.

How would he describe her? She was “a slender young lady, and lively.”

He often taught classes at night. When he got home, he’d put on an album, usually something like Bartók or Beethoven. It’d be late, but he didn’t think it bothered his family or anyone upstairs. No one ever complained. Not all of his albums were highbrow. He had two Hank Williams 12 inch albums. One was “spoken poems,” he explains, “Luke, the Drifter.” The other had some of Williams’ standards, like “I’m So Lonesome I Could Cry.” That album reminded him of home, in the mountains of North Carolina. One night, he put that one on.

He passed Emmylou the next morning. She said, “Well, at last you played something worthwhile.”

That quip may be her best line ever.

Did he ever see her play? One time. Chappell says he stopped in the Red Door on Tate Street briefly and saw her performing. The Red Door was a small, narrow joint – “like a wide hallway” – with a tiny stage at the rear and the bar to your right, as you entered, he recalls. Maybe 20 people could fit in the space; he thinks it had once been a coffee shop. On that evening it was filled with soldiers from Ft. Bragg, and they were cheering her. They liked her.

David Giddens played his guitar and sang downstairs at the King’s Inn Tavern near Moses Cone on weeknights, to earn some money, once he enrolled in 1965. He’d often play there with UNCG student Betty Anne Myatt. He’d play whatever people wanted to hear, he says, hoping for more tips. “I did that every night. That’s how I put myself through school.”

And he played downstairs in UNCG’s Elliott Hall on many weekend nights, just for enjoyment. There, he played what he wanted, which was mainly folk.

Anyone could play there. Emmylou Harris and one guy would often duet, he remembers. Barbara Wesley Baker often played too. Baker noted that Giddens took the initiative, of the core group of performers.

Giddens says, “I don’t remember who exactly pulled it together and helped me on that – I know I didn’t do it by myself. It was my idea to pull it together.”

He adds, “We would convert it into a coffee house, and myself and other musicians would come in and perform, and one of those musicians happened to be Emmylou Harris. She came in with a guy she was performing with, and it was great.”

The duet partner’s name? “I don’t know his name. He was backing her up and occasionally I think they sung duets, but most of it was her.”

How would he describe Harris? “She was friendly, she was kind, she was thoughtful. She had a beautiful voice. She played the guitar very well. She was soft-spoken. … I never performed with her, no. I’d loved to have, but I never did.”

His academic focus was rigorous. “My major was music education. My primary instrument was voice.”

Due to a stroke seven years ago, he no longer plays guitar, but he still loves to sing.

Where did he learn to develop that love of singing, when he was a boy? He reminisces. “I used to go out in the woods and sing as loud as I wanted to, because I couldn’t sing as loud as I wanted to anywhere else. But I guess, you know, church, at home, watching religious shows on TV. A little Mahalia Jackson, watching her on the morning religious shows, and others. My father sang, so he had a vision of the three of us, my brother and my sister, coming together and forming a little trio or whatever and singing. We never ended up doing that, but all of us did enjoy singing.”

He notes that his younger daughter, Rhiannon Giddens, performed at a “celebration of gospel” concert at the Obama White House, on the same bill with Emmylou Harris. His older daughter, Dr. Lalenja Giddens Harrington – who many at UNCG know as director of academic program development and evaluation at UNCG’s Beyond Academics – is also a musical artist. Each are UNCG alumni (Rhiannon attended graduate school and Lalenja earned her doctorate), and each has a remarkable voice and artistic vision.

And all the artistic individuals featured in this three-part Campus Weekly series – from Sandra Forman to Barbara Wesley Baker to David Giddens – are part of an unbroken band of artistic creativity that is a hallmark of this campus.

Top visual: 1968, courtesy Marty Barber. From left to right: Barb Staderman Holt ‘69, Marty Barber (on guitar), Maria Hernandez Johnson ‘70, Kathy Wilson ’69 (on guitar). They would play and sing on the stairs between Grogan and Reynolds residence halls. Here, they are on 8th floor.