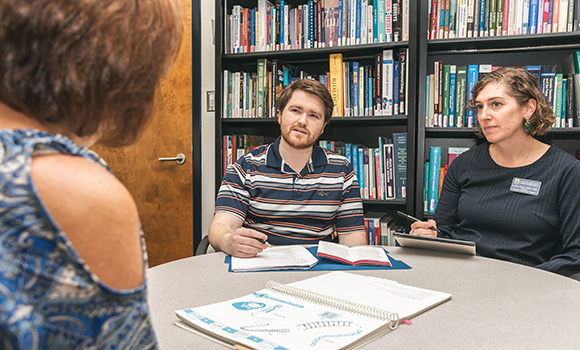 "The genetic counseling program at UNCG is impactful because it allows you to get to know the human experience while learning about diagnoses," said Clayton Mann (left), a second-year graduate student in UNCG's genetic counseling master's program. In counseling sessions, students are often observed by the program's director, Lauren Doyle (right).

The moment she stepped onto UNC Greensboro’s campus, Lauren Loffredo ‘18 MS knew the Master of Science in Genetic Counseling Program would be the right fit. What she didn’t know was the impact it would have as she faced one of the most difficult times of her adult life.

“I don’t think I would be where I am today without the family that is UNCG,” said Loffredo, a prenatal genetic counselor at the Winnie Palmer Hospital for Women & Babies, Center for Maternal Fetal Medicine in Orlando, Florida.

The New York native knew as an undergraduate at the University of Buffalo that the field of genetic counseling was the perfect intersection of her interests – applying the complex science of genetics in passionate, patient-centered settings. When it came to choosing a graduate program, UNC Greensboro, home to the only graduate genetic counseling program in the state of North Carolina, was at the top of her list.

Genetic counseling, basically taking the complexity of genetics and making it accessible to patients, is still relatively new in the scope of healthcare fields, said Lauren Doyle, director of the MS in genetic counseling program, but is one of the most rapidly growing healthcare professions in the country. One report she pointed to estimated 4,500 practicing genetic counselors in the U.S. with 400 graduates a year. The same report projected the field to grow by 30 percent through 2024.

“You can buy a genetic testing kit at Target next to the toothpaste,” Doyle said.

UNCG’s genetic counseling master’s program enrolled its first class in the fall of 2000 and collaborates with all major medical centers in the state.

In 21 months, students are prepared to help individuals navigate the healthcare system, address moral questions and make life-changing decisions in prenatal, pediatric and cancer treatment settings. They hold clinical positions, work in education, industry, laboratories or policy. They see patients in general clinics and can also specialize in neurology, cardiology, or metabolic disorders, among other subspecialties.

“What I believe about genetic counseling is that things happen to people in the medical sphere that they can’t predict,” Doyle said. “To me, it’s like being in the fire. I believe above everything else everyone deserves someone to walk through the fire with them.”

For Loffredo, a visit to UNCG’s campus was all it took for her to decide it was the right program.

“I thought, this is what I want to be a part of, from an academic standpoint, a clinical standpoint, and above all, because of the personal interactions with classmates and supervisors,” Loffredo said. “What more could you ask for?”

She didn’t have to ask, but Loffredo got so much more.

While in school, Loffredo’s grandmother tested positive for an abnormal BRCA2 gene mutation, meaning her grandmother was at greater risk of developing breast and ovarian cancer. The news was heartbreaking, and Loffredo knew what it meant: There was a 50 percent chance her mother and aunt carried the gene.

It was the end of her first year in graduate school, she would soon begin seeing cancer patients in her clinical rotations, and the positive result meant Loffredo herself would test to find out if she had the same mutation.

While she cared for her mother after the surgeries, Loffredo received the news that she too was a carrier.

The genetic counseling program at UNCG not only provided her with the skills and information to counsel her family and advocate for them, but the support to take care of herself during such an emotional and challenging time.

“I have never described myself as a particularly strong person. Positive, kind, compassionate, yes – never strong. But in this situation, I’ve had to learn to be strong and brave and face things,” Loffredo said. “I don’t think that I would have been able to do that as well if I didn’t go through this program.”

Doyle said one of her core beliefs is that in order to be the counselor, you need to have the best understanding of who you are. That’s why, along with the deep knowledge the program provides, students also spend time on personal growth and development.

It was just what Loffredo needed.

“They helped me grieve, but also to welcome it home as something that’s a part of me and has always been a part of me,” she said. “I truly benefited from having the knowledge and support of these people around me. It’s a tough thing to go through, but I’m thankful for the experience I had.”