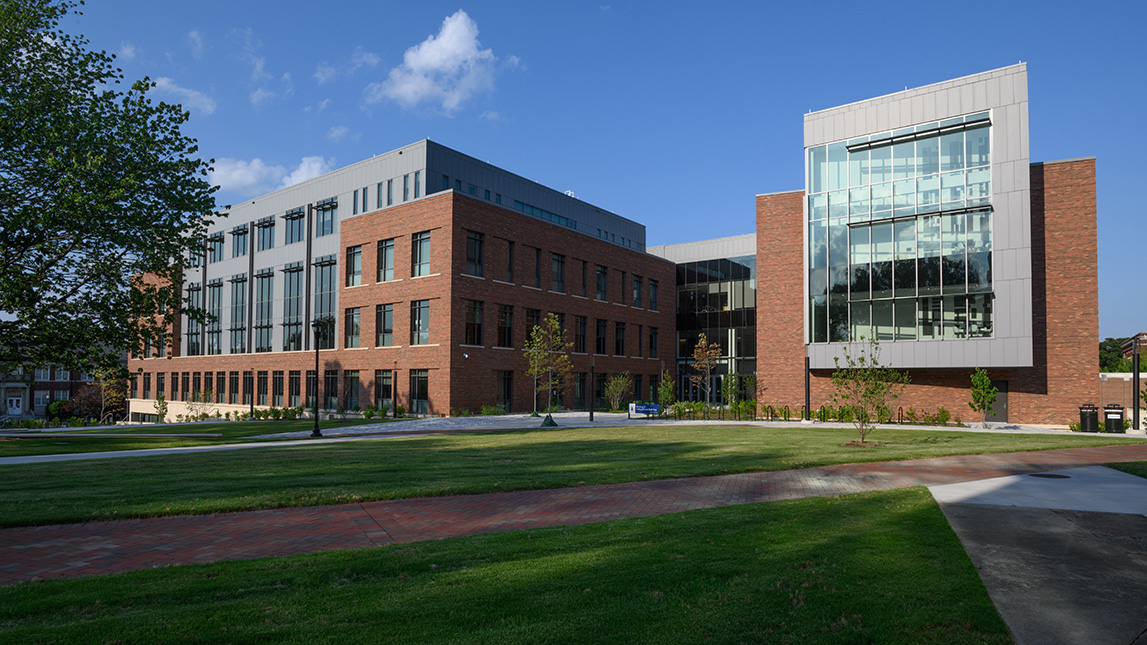 At first glance, the newest building on campus is a massive brick-and-glass structure in shades of red and gray.

But the real color of the Nursing and Instructional Building is green.

Green with a hint of Gold.

The NIB has continued a trend on UNC Greensboro’s campus, earning Leadership in Energy and Environmental Design (LEED) Gold status — the second-highest rating on a measurable scale created by the U.S. Green Building Council.

That’s a pretty big deal. And, even bigger, the NIB is the 20th building on campus to earn LEED status.

“It’s a lot,” says Sameer Kapileshwari, UNCG’s associate vice chancellor for facilities. “Especially when you consider UNCG is like a small city by itself. It’s been very challenging, but we are committed. We’re trying to build new construction or renovation projects with little or no impact on the environment.”

In all, the 20 LEED-certified buildings account for 1.8 million of the 6 million square feet on campus.

“That’s 25 percent of our inventory of buildings,” Kapileshwari says. “That goes back almost 10 years now, when the university’s leadership decided, ‘We need to do something about climate change, and not just talk about it.’ So they took proactive steps to mitigate that.”

The NIB is the latest example.

The $105 million building opened in the spring, next door to the oldest building on campus, the 129-year-old Foust Building. The NIB is the new home of the School of Nursing, which had been scattered across four buildings before. It also houses labs and classrooms for the School of Health and Human Sciences and the Departments of Biology and Chemistry.

“The idea was to create a collaborative environment where students, faculty and researchers could be in a free-flowing space, a space where it was easy to exchange ideas,” Kapileshwari says. “We didn’t want to isolate people in silos. We wanted to use the space wisely and give our students opportunities to work with people outside their department. Because the problems of the world today are not solved by one group or another. They’re solved with collaborative efforts.”

The old McIver Building was torn down to make room for the NIB, a conscious decision to make the best use of the university’s footprint rather than taking away green space for a new building. The NIB took architectural cues from the structures around it, and it incorporated parts of the McIver Building including the distinctive designs above the old building’s entrance.

“We repurposed and reimagined this artwork from McIver,” Kapileshwari says. “We took it inside the building behind the glass wall. The idea goes back to acknowledging our history. We didn’t want to take this piece of art and put it in the recycling bin. So we salvaged it and reused it.”

The green spirit of the building isn’t always in plain sight. All the artificial lighting comes from high-efficiency, long-life LED fixtures. A self-contained solar system on the roof supplements the high power demands of a science building. A state-of-the-art mechanical system provides ventilation. Even the landscaping helps minimize run-off.

Building with LEED standards in mind takes a lot of effort. But you can’t argue with results.

“And mind you, during this period we put in a lot of housing and residence life buildings. What are those? Those are 24/7 operations,” Kapileshwari says. “Even with that, we’ve had this constant trend downward in usage. We’re conserving energy and resources, but at the same time thinking about the well-being of our buildings’ occupants.”