‘Hear Our Voices’: an inclusive celebration of new musical theatre 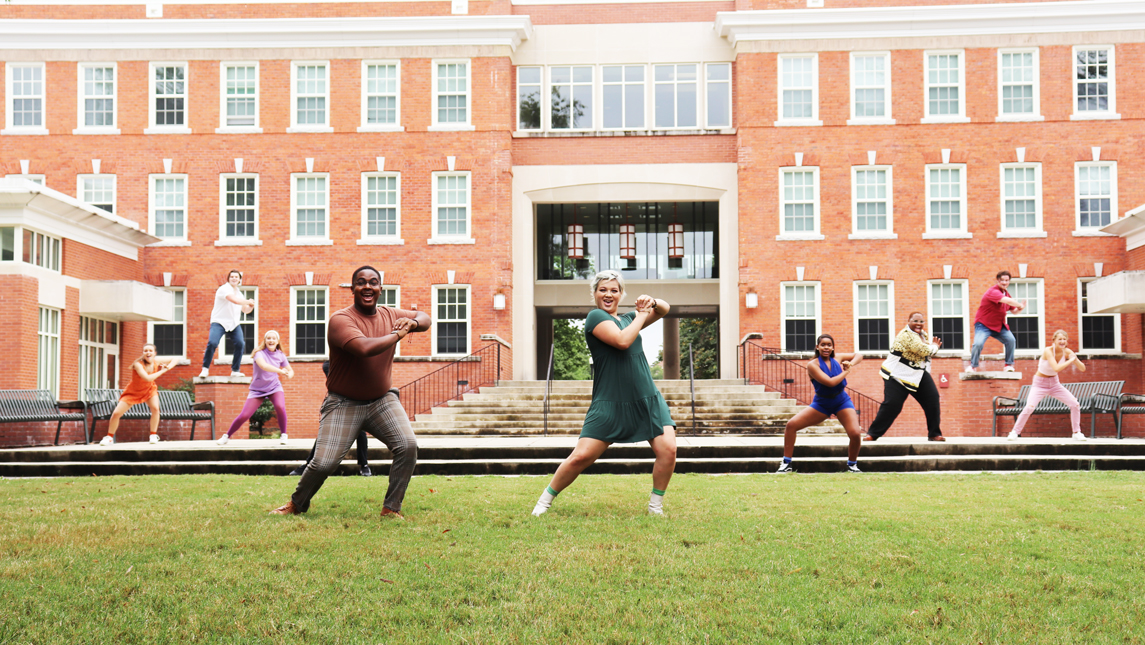 On Nov. 12-14, UNCG School of Theatre will present “Hear Our Voices: An Inclusive Celebration of New Musical Theatre.” The production is a brand-new song cycle which consists of unpublished music written and composed by BIPOC (Black, Indigenous, and people of color), disabled, female and LGBTQIA+ (Lesbian, Gay, Bisexual, Pansexual, Transgender, Genderqueer, Queer, Intersexed, Agender, Asexual, and Ally community) artists from all over the country.

The project was brought to life by UNCG Theatre faculty Erin Farrell Speer and Dominick Amendum, both of whom coordinate the newly-founded BFA Musical Theatre program for the School of Theatre. “Hear Our Voices” will be recorded and available for on-demand viewing.

When the COVID-19 pandemic started in the spring of 2020, Speer and Amendum began to plan what the future could look like for their burgeoning musical theatre program and the upcoming fall musical.

“Instead of moving into the realm of ‘Zoomsicals’ like many programs have been doing, we realized we had an opportunity to pivot into something that would be a pedagogically sound learning opportunity for students,” said Speer, who is directing the song cycle. In moving to a song cycle format, our students are learning to work in a recording studio environment and expanding their work on camera to include musical theatre work.”

Speer says there is intense interest in new musical theater right now from people who are a part of marginalized groups, noting that the response to the call for submissions from BIPOC, disabled, female and LGBTQIA+ writers from all over the world was overwhelming.

“The Song Cycle format has given us an opportunity to use our School of Theatre platform and resources to support the work of emerging musical theater writers from marginalized communities,” Speer said.

The process for this production has been unlike anything ever seen at the UNCG School of Theatre. The opening number is the only song to feature an ensemble-style performance, which Speer said led to an interesting challenge. “We pre-recorded all of the audio for the song on a closed set, one person at a time over the course of several days. Essentially it was like we were recording a Broadway cast album. Once the rough mix was ready, we spent five days filming the number outdoors around campus as a sort of ‘music video.’”

Speer also mentioned that since this production is filmed, which is atypical for a musical theatre production, they were fortunate to have the help of Michael Flannery, who teaches Acting for the Camera at UNCG. MFA Dance student Allison McCarthy is the choreography director on the project, and BFA Design Tech student Izzy Kitch designed the costumes.

Speer had this to say about “Hear Our Voices” and the exciting future of the UNCG Musical Theatre program: “As many of my colleague’s careers and artistic prospects have come to a standstill with the closure of Broadway and regional theatres, I know how fortunate I am to be able to safely create and collaborate right now. It’s such a gift to be able to raise up the voices of new musical theater writers in a way that feels joyous and inclusive. I’m pretty darn lucky to have landed here at UNCG, developing a new musical theatre program that can respond quickly to the changing demands of an industry in crisis. We’ve been known to call it a ‘musical theatre program for the 21st century’, and we certainly have an opportunity here to live up to that name.”