How puberty can impact teens’ knees 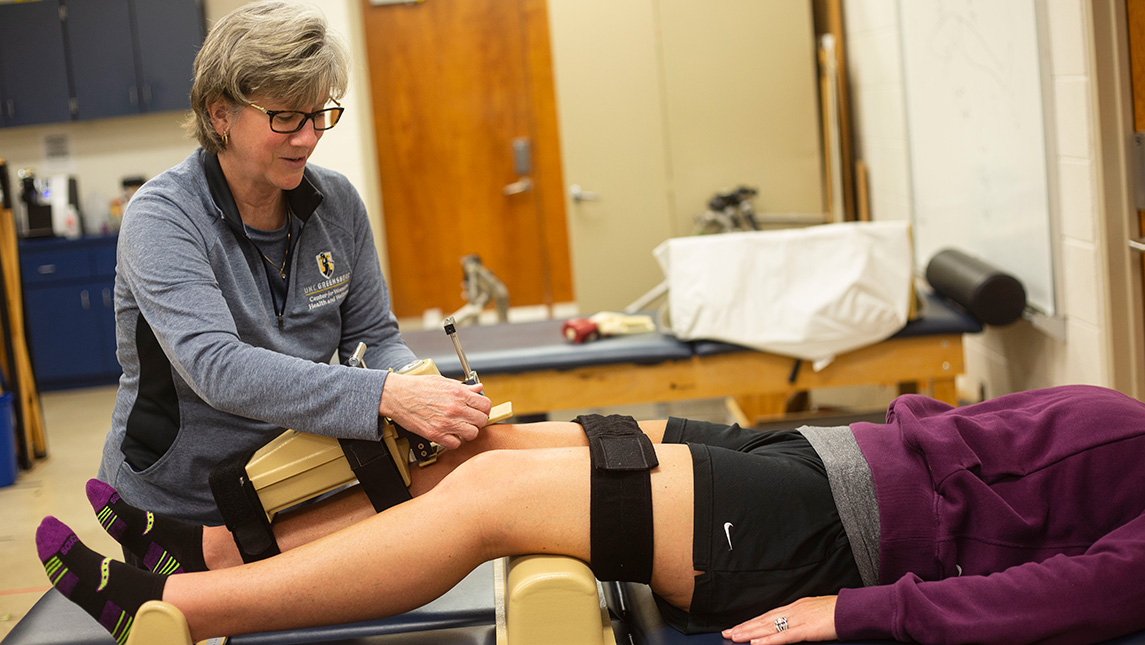 Puberty may evoke a range of memories, from acne to awkward moments. But chances are, this uncomfortable time period may not make you think immediately of your knees. Maybe it should.

Research suggests that some of the physical changes females first experience during puberty may contribute to their risk of anterior cruciate ligament (ACL) injury. UNCG expert Sandra Shultz, who is a professor in the Department of Kinesiology and the director for the Center for Women’s Health and Wellness, has devoted her career to generating cutting-edge research on this topic.

Shultz is not only a leading researcher in ACL risk and prevention with more than $1.6 million in grant funding and more than 100 peer-reviewed manuscripts; she also brings 13 years of firsthand experience from her prior position as the associate director of Athletic Training Services at the University of California Los Angeles.

In one season alone, she said eight women tore their ACLs.

“It almost felt like an epidemic,” she said. “What do we need to do to stop these?”

The answer to stopping ACL tears is not simple, but that has not stopped Shultz, her colleagues, and researchers from across the world from conducting studies to better understand the key factors underpinning ACL injury. One perplexing question relates to why female athletes are more likely to injure their ACLs than male athletes, beginning in puberty.

“We don’t see a lot of ACL injuries before the age of 10,” Shultz said. “From about 11 to 18 years of age, there’s a steep increase in ACL injuries. And that rise and risk is much steeper in females than males.”

It would be easy to blame ACL tears solely on how a person moves – the sharp jabs of a soccer player switching directions or a basketball player’s off-kilter landing from a layup. But Shultz shared surprising insights about how some underlying factors, from shifting hormones to changes in body composition and knee joint laxity, may also play a key role in ACL risk and injury.

Puberty is propelled in part by hormones, which are chemicals that help create a variety of changes in the body—from mood shifts to muscle mass. Hormones may be tiny, but they are mighty messengers that travel in the body’s bloodstream.

Research suggests that these hormones may play a role in how loose the ligaments are in the knee (i.e., knee joint laxity), according to Shultz. And this is important because knee joint laxity is a leading risk factor for ACL injury.

How can these small chemicals impact the stability of the knee? Let’s take a closer look at hormones in action. Often described as a “key,” a hormone seeks a “lock,” or a receptor to relay its message. Once the key and lock meet, a change can occur in the body.

During puberty, females experience a rise in hormones, including estrogen. One of the receptors for estrogen is on the ACL. In other words, the circulating hormone can directly interact with the ACL, potentially altering its structure, Shultz explained.

It’s not only at the onset of puberty that a female’s hormones shift. Each month after her maturation, her hormones rise and fall throughout the menstrual cycle. Scientists have investigated whether a female is more likely to tear her ACL at different points during her cycle.

“There does seem to be a greater proportion of injuries that occur in the first part of the cycle compared to the second, and they seem to clump around the onset of the cycle and right around ovulation,” Shultz said.

At this point, scientists do not yet know exactly why these time periods with fluctuating hormones are linked to more ACL injuries or how this coincides with observed changes in laxity. Shultz explained that more research is required on this topic – a line of research that can be tricky, given the variability of each female’s cycle.

Another ongoing area of inquiry is how hormones and genetics interact to increase a female’s risk for ACL injury. Multiple studies have indicated females are more likely to tear their ACL if another family member has torn their ACL, too – suggesting that ACL injuries may in part be inherited. This genetic link is supported by past studies indicating that females who have a particular genotype for collagen have higher rates of ACL injury and knee joint laxity.

The potential impact of hormones and genetics is greater than their direct impacts on knee laxity. Rather, both of these factors can have far-reaching and synergistic impacts throughout the body during puberty, including on guiding body composition and anatomical changes.

“You can’t separate genetics and hormones from anything,” Shultz said.

Gearing up for the pubertal transition, starting about the age of 12, females start to add more fat, while males add more lean mass, according to Shultz.

This difference in this relative fat mass across genders has the potential to impact the stability of the knee, Shultz explained. “Given the same body weight, females essentially have less muscle mass to dynamically control the body and keep the knee joint in alignment.”

And it’s not only the amount of fat or muscle that may play a role in knee stability. The size of the ligament itself may also influence injury. To explain, let’s take a closer look at the ACL.

The word ligament derives from the Latin word for “to bind.” And the ACL does just that  – helping to bind the thigh bone (i.e., femur) to the shin bone (i.e., tibia). The ACL doesn’t act alone, but rather works with other supporting structures, including the posterior cruciate ligament (PCL). The ACL and PCL act like two crisscrossing support beams, working in tandem to stabilize the knee and connect the femur and tibia.

During puberty, research has consistently demonstrated that females typically develop, on average, smaller ACLs compared to males, according to Shultz. Smaller ACLs are known to be structurally weaker and more lax, which may have a more difficult time stabilizing the knee and handling the same loads as a larger ligament.

The combined impact of a smaller ACL and less muscle mass per unit body weight may predispose females to move in ways that can be higher risk for ACL tears. Shultz explained that this is particularly concerning because females with smaller ACLs have a lessened ability to resist external loads.

One of these higher-risk movements is when the knees collapse inward towards one another during a squat or a jump. This inward collapse, known as the valgus position, creates an upside-down “V” structure with the lower half of the body.

Researchers and practitioners have focused primarily on reducing high-risk movements in females through neuromuscular training, according to Shultz. For example, an interventionist may instruct an individual on how to land from a jump with her knees directly over her feet, instead of her knees caving inward as part of her recovery plan from ACL injury.

While these efforts to adjust movement patterns have been shown to reduce ACL injuries, much remains unknown about why females may be predisposed to higher risk movements and ACL tears during puberty. Shultz said that this field is relatively young, given that the first peer-reviewed paper focused on females’ risk for ACL injuries was published in the late 1990s.

Shultz and her collaborators at UNCG in the Department of Kinesiology and beyond will continue investigating the underlying reasons for why females tear their ACL, chipping away at this conundrum of puberty’s role in knee injuries. Future efforts include a systematic review to examine how sex differences relate to risk factors for ACL injury.

Story and photography by Rachel Damiani