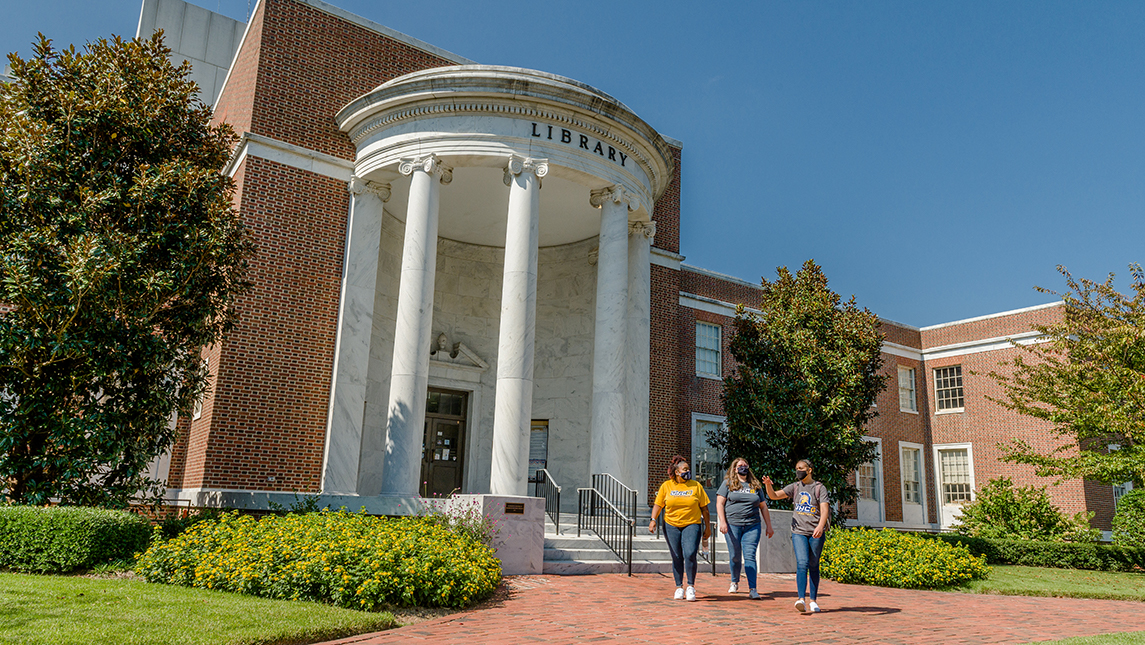 A campus landmark is finally getting some love.

In the recently approved 2022 state budget, UNC Greensboro was awarded $81 million to renovate and expand the beloved 71-year-old Walter Clinton Jackson Library. Named after UNCG’s third chancellor, it’s the most popular venue on campus with 10,000 visitors daily and 1.25 million annually.

Originally built in 1950 with two stories and a basement, the library has not seen significant updates since the addition of the nine-story tower in 1973. Since then, the University’s enrollment has tripled. Beyond accommodating increased foot traffic, the library needs new fire suppression systems, ADA-compliant access for doorways and aisles, expanded storage for books, archives, and special collections, as well as access to the most up-to-date technology resources for students, including study spaces.

The good news is we can have the best of both worlds, ushering in the new while preserving the architectural beauty of the original structure.

According to Sameer Kapileshwari, associate vice chancellor for facilities, the architectural plans are designed to preserve the historical original building while implementing much needed renovations and expansions, including electrical, plumbing, life safety and accessibility, among others.

Renovations and upgrades are expected to take place over the course of several years in stages to ensure the library remains open and operational during the construction process.

Incorporating the immediate and future needs of all patrons – students, faculty, staff, and community members – academic libraries have become endlessly creative in responding to changes. They are remarkably resilient places and continue to innovate, surprise, and prove their necessity within the social and cultural aspects of campus life. As the role of the academic library expands, this renovated building project can transform Jackson Library into learning, instructional, and collaborative spaces for everyone. These dedicated areas, such as enhanced reading rooms and increasing technology connections, can effectively showcase how academic libraries provide a way of illustrating the institution’s past, as well as its future. Ultimately, academic libraries are a source of pride for their institutions and broader communities, and the Jackson Library renovation will provide the refresh needed to continue to keep our library a relevant and resourceful icon for our beautiful campus.

The Walter Clinton Jackson Library stands at a crossroads in the University. From its beginnings in 1905 as Carnegie Library in the Forney Building, through the move to its present location, expansion with the Tower addition in 1974, and connection to the Elliott University Center in 2005, the Library has pursued its mission to foster the success and impact of the UNC Greensboro community by promoting learning, inspiring creativity, and enhancing research and collaboration in a diverse and innovative environment. Located in the geographic center of the campus, the Library is ideally positioned to be a thoroughfare and hub of activity, connecting students – current and prospective – to academic, cultural, and social centers on campus, as well as to the Greensboro community and the larger society.

It has been more than forty years since the last major capital investment in Jackson Library; the Library’s time has come. The master plan’s top priority – and the project atop UNCG’s wish list for the past several years – is an overhaul of the university’s 70-year-old library. A sustained initiative to upgrade and replace aging mechanical systems, address life safety and code issues, and enhance existing infrastructure should be accompanied by a strategic learner-focused and community-based effort to repurpose, revitalize, and expand public and staff spaces to engage and support twenty-first century students and scholars. Such a multi-faceted, multi-year, multi-million dollar effort will enable Jackson Library to continue to play a vital role in the life of the academic community, and to contribute to the success of the University for another generation.