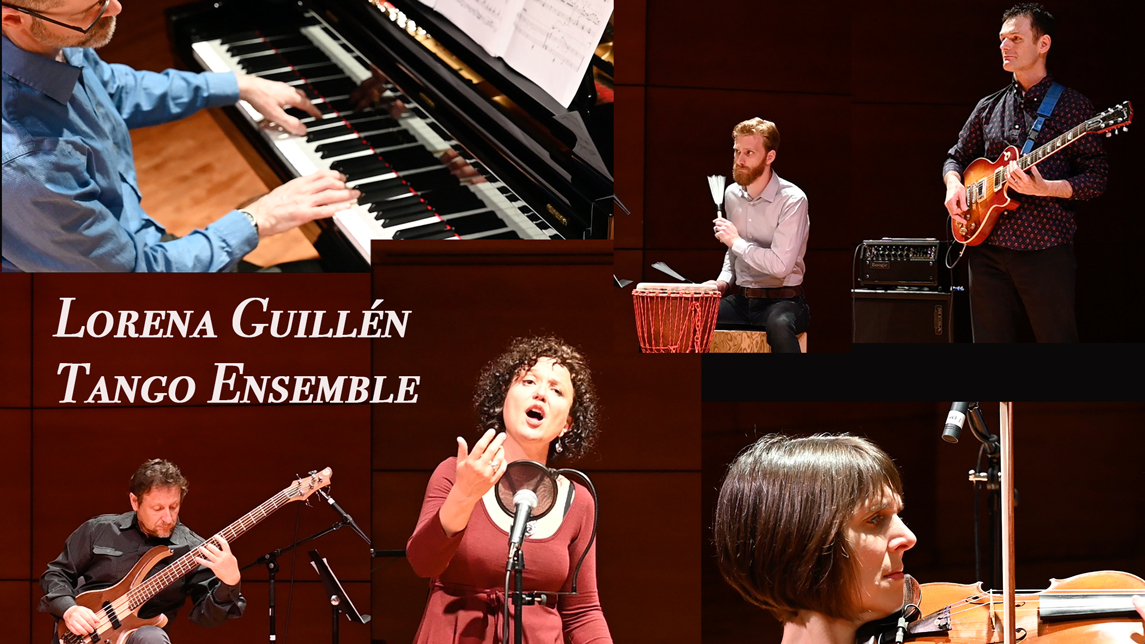 Last week it was announced that the Lorena Guillén Tango Ensemble took first place in the North Carolina Folk Festival’s Not Your Average Folk Contest and will be performing at the free, three-day outdoor multicultural festival, in downtown Greensboro Sept. 10 to 12.

The Ensemble brings the vibrant sound of Argentine Tango-fusion to a variety of audiences, and this coming Sunday,  they’ll also perform at the second live Music for a Sunday Evening in the Park (MUSEP) concert of the 2021 season, at the outdoor White Oak Amphitheater at the Greensboro Coliseum Complex.

In 2018, Guillén and the Ensemble produced “The Other Side of My Heart,” an oral history musical piece based on interviews with Latina immigrants. With a focus on engaging young audiences and promoting cultural diversity, the musicians have also made it their mission to do outreach within communities. Guillén and the Ensemble maintain close connections with Casa Azul of Greensboro and the Hispanic League of Winston-Salem, and they perform and collaborate with local groups such as Durham-Tango, Alma-Tango, youth orchestras around North Carolina, and the Triangle Jewish Chorale. Recently, they filmed a PBS show, “Music at the Museum” at the North Carolina Museum of Art as part of a contest, and received first place in the World Music category. They are currently at work on a second album called “Tango Diaspora.”

UNCG News interviewed Guillén about the Ensemble and her personal musical history.

Could you tell us a little bit about the ensemble members and the UNCG connections?

So, that tells you how lucky we are to have such good quality professionals and performers who really develop artistic agendas beyond teaching, and even in the things that we create on our campus. There are many others like us in the School of Music  – it’s a wonderful place with such a high level of artistry.

Who or what inspired you to get into music?

I don’t come from parents that were musicians themselves, but they were appreciative and good listeners. I have wonderful memories of enjoying every Sunday when I went to f my grandparents’ house for lunch, and he was an avid listener and collector of recordings of opera, but also of Tango. So, I was exposed to a good mix of “La Traviata” and some of the most wonderful Tango orchestras. That was part of my musical environment, and from the very beginning, it felt very natural and fluid. All of this was wonderful music with lavish orchestrations of opera and Tango. My father, in particular, was a fan of a few folk festivals that he went to every summer, and I have memories of being five and six years old, and he took me there and I listened to group after group. I was nine years old when I started asking my parents if I could have music lessons.I started with guitar – it felt like the most approachable instrument. And one thing took me to the other. I then took voice lessons. In my high school years, I got to meet one of my main mentors, a very wonderful music teacher who really taught me what I could really do with my abilities. He encouraged me to get into the music conservatory and start formal musical study.

Of the songs that you’re performing, which is your personal favorite, and why?

I have many favorites, and I think I fall in love with different moments of each one. One of the latest songs I have been performing this past year is called immense, immense solitude. I love that song – when I wrote it, I think that I found a good way of expressing what I was feeling. I was inspired by one of those wonderful moments that we sometimes have, driving in the dark night of North Carolina and seeing a shooting star cross the sky. I was with my kids in the car, and all these questions started to float around my head, and in the end, it was a very vivid and visually powerful experience. After I wrote the song, the ensemble worked on the arrangement together. So, it is really a collaborative creation. I wrote the lyrics, melody, and harmony, but then I took it to the group and we really made it into the song you hear today. That’s why it’s such an amazing experience to be collaborating with the incredible musicians in the group – they are so, so talented. And what amazes me every time I have the opportunity of rehearsing and creating with them is that they speak with their instruments – every note, every sound that they articulate is part of their personal expression. They go beyond the simple notes, and it’s with such a colorful, artistic sensibility that everything comes together. Naturally, after being together for the past six years, I think we can speak musically together.

How would you describe Argentine tango or your style and your connection to it?

I define the style that we have created as a band as “Tango-fusion.” It is Tango – has the idioms, tropes, and gestures of Tango, especially modern Tango. But also, we bring in other influences, other styles of popular music from Latin America, like Candombe, Samba, and Milonga. The arrangements that we create are crafted with imaginative combinations for the instruments that we have in the band; we put special emphasis in the way we play each note and line. So, it’s really a combination of the precise experience that each of us in the band has with other styles. We have a repertoire that ranges from dynamic arrangements of Tango standards to really exciting original compositions.

Could you describe a few of your recent projects?

A few years ago, we did “The Other Side of My Heart,” which was about Latina immigrants. We told their stories and transformed them into a musical art visual piece. More recently, I created a whole new project that is an exploration of the intersection of Jewish culture and the Jewish Diaspora with Tango. Over the years, I found a lot of repertoire that was originally in Yiddish, but the music style accompanying it was Tango. I started to explore and found even more. There is a whole connection starting in the 1920s, when the Argentine Tango was really celebrated in Europe and then spread around, because everybody went crazy for this style. Eastern European countries really adopted it, and everybody wanted to dance to and play this music. So, there were composers that started to compose pieces in Yiddish in Tango style and orchestras in Poland that devoted themselves to playing this repertoire. In Yiddish theaters in New York and in Buenos Aires, many of the musicals have always had Tango styles ,and and on top of that, all these generations of immigrants coming from Eastern Europe into the country exactly at the moment in which Tango was at its peak and in its golden era. So, it was one of the places where many of the immigrant musicians were able to insert themselves. There is also this whole first generation of Eastern European Jewish composers in Argentina playing in the Tango orchestras and composing tons of Tangos in Spanish. So I said, “Oh, I have to do something with this repertoire,” and we started to play some of these pieces. Alejandro Rutty, who is the bass player in the ensemble, arranged some of those for our Tango band and choir. We did that with my choir and with the UNCG University Chorale. Conductor Carol Ott collaborated and participated in introducing the students to these songs. I coached them in Spanish and I brought one of my Yiddish speaker experts to coach them, too. I told them about the stories behind the Tangos, because some of them were created between the two worlds, so there was very interesting information behind the creation of these pieces. The students learned how to dance the Tangos as well. We gave them a whole immersive experience, and showed them an example of how music moves around the world, how people migrate with their music, and how they absorb the music in the new places where they are.

The Lorena  Guillén Tango Ensemble is made up of:

Nationally and Internationally, the Ensemble has performed at Kleinhans Music Hall and the Calumet Arts Café in Buffalo, N.Y.; MusicBox Theater and Folk Research Center in Saint Lucia, West Indies; the Frick Museum Summer Concerts in Pennsylvania, and at the Center stage Series at the Sangre de Cristo Auditorium in Colorado.