Pulling together to serve and protect families in need 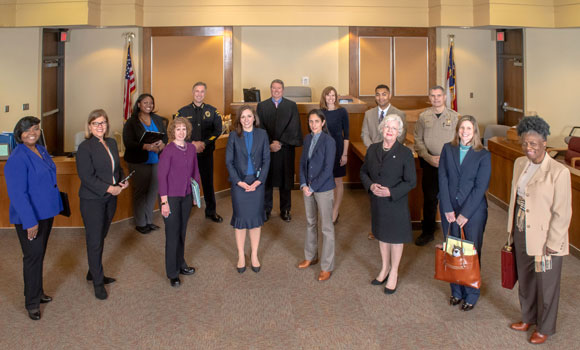 Catherine Johnson '09 MS/EdS (center) leads a collaborative, innovative mission to help victims of abuse. Many in this collaboration are UNCG alumni and faculty.

This post originally appeared in UNCG Magazine. To read other stories about UNCG alumni making an impact, visit alumnimagazine.uncg.edu.

It’s been five years since Catherine Johnson ’09 MS/EdS stepped into the role that would change her life and have a far-reaching impact on Guilford County.

The 35-year-old graduate of UNC Greensboro’s Department of Counseling and Educational Development has helped serve more than 20,000 people at the Guilford County Family Justice Center-Greensboro, the “one-stop shop” in Greensboro for victims of domestic violence, sexual assault, child abuse, and elder abuse.

The center has received national recognition for its unified services model. In 2015, Guilford County led the state in domestic-violence related homicides. Johnson said North Carolina has since seen a 77 percent reduction, despite a rise in the overall homicide rate.

“Our community believes through collaboration, we can do better.” – Catherine Johnson ’09 MS/EdS

“If we get people the help they need in an efficient way, we can save lives,” Johnson said.

Data collected on the intersections of violence and abuse from UNCG’s Counseling and Educational Development program helped Johnson and her team prove the significant impact the Family Justice Center has made on the county and the need for continuation of services in High Point.

“UNCG has really been a stakeholder and staple throughout the process, helping us look at the community impact from a macro-level,” Johnson said.

“We weren’t engaged in the systems in the High Point community, so an expansion made sense,” Johnson said.

The Guilford County Family Justice Center is based on an integrated care model for people in crisis – what Johnson said operates like a triage, similar to patients walking into an emergency department. Victims have access to police officers and deputies; social workers; advocates; courtrooms that allow them to video conference with a judge about their case; and playrooms for children. Children who need to have forensic interviews can do so in the same building.

For someone in crisis, what would have taken weeks – if they had the emotional and financial resources to go from place to place – is consolidated into one place and into a much smaller amount of time.

“We bear that burden of managing guidelines and rules and partner agencies,” Johnson explained. “When you’re in crisis, you shouldn’t bear the burden of the systems there to help you.”

When Johnson noticed one of the biggest unmet needs in Greensboro was access to legal consultation and legal services, she sought out a new partnership between the Family Justice Center and Elon Law School.

It’s this type of solution-based, systematic approach that she credits to her training in marriage and family counseling and mediation at UNCG.

“You don’t look at the identified patient, but everyone who is involved with that individual,” Johnson said. “I use that family-systems approach on a community-system level. It’s not about the one, it’s about everyone in the room connecting.”

UNCG’s program also gave her skills in negotiating and the ability to think through strategies.

“It’s about leaning into the conflict versus stepping out of the room,” she said. “The other great thing was the opportunity for self-reflection and self-awareness. That’s so valuable when working with a lot of systems and large-impact change.”

This type of big-picture work, taking on government systems, pushing for change – it’s tough. Johnson remembers driving home one day, early in her position as the new Family Justice Center-Greensboro director, and thinking of the thousands of lives that were about to be changed.

“One of my hobbies is running marathons, and I realized this work parallels marathons: What does it mean to be patient and disciplined when it’s difficult?” Johnson asked herself.

Her answer to that question, she said, came from UNCG.

It’s been less than six months since the new Justice Center opened its doors, but Johnson said she’s already seeing progress. Of the homicides in the High Point community, not one has been associated with someone seeking help from the Family Justice Center.

“What’s exciting about this work is that I’m 35 and running a collaboration like this, and most of my peers are at least 25 years older,” she said. “That’s the power of momentum. I think that’s that sense of, there was fertile ground to see the needle move. They believed things could be better and wanted someone with enough fire to say, ‘OK, let’s do it.'”