The story behind that iconic Emmylou Harris photograph 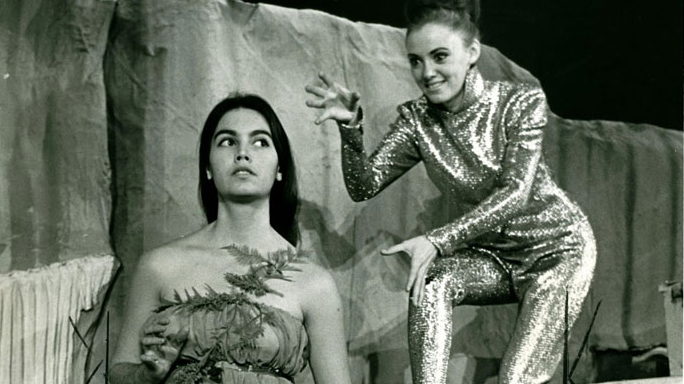 If you’ve seen one photo of Emmylou Harris during her UNC Greensboro days, this is the one.

It’s from Shakespeare’s “The Tempest,” the first and only Shakespeare production for the aspiring actress from Birmingham, Alabama. She was a freshman attending UNCG on a drama scholarship.

The actress on the right was Sandra Hopper, now Dr. Sandra Hopper Forman ’66, ’71 MFA, a senior and the first Raymond Taylor scholar. She became a member of the first UNCG MFA class in theater in 1967.

“She was Miranda, and I was Ariel,” said Forman in an interview this week.

They were the only women in the cast with speaking roles; all the others were male faculty from around campus, as Forman recalls, with Dr. Arthur Dixon, an English Department faculty member, portraying Prospero. Woman’s College had just become the co-ed UNCG, with very few males enrolled so far. The two women naturally hung out a bit during the rehearsals.

And speaking of “hanging out,” Dr. Herman Middleton, a theater professor and department head, gave the freshman some advice that, even if she didn’t heed it, Forman remembers well. Middleton stopped her in the UNCG Auditorium lobby, and said:

“Emmylou, you’re never going to amount to anything if you don’t stop hanging out at that coffeehouse.”

That coffeehouse was down at the part of Tate Street known as “the corner,” Forman explains. It was well known that Harris liked to play her guitar and sing. “She liked to hang out there a lot.”

She doesn’t recall Harris singing in the Shakespeare production, but as Ariel – “I was a sprite” – Forman danced and bounded across the stage and sang several melodies.

Harris was an impressive freshman actress. “She was charming and pretty,” Forman recalls.

Before Taylor Theatre was built later that decade, the productions were in UNCG Auditorium (then called Aycock Auditorium). “We packed it. We used to fill the house. There were no microphones. The voice work was very critical.” They projected their voices to the top of the balcony, she says.

Forman joined the faculty and taught at UNCG till 1990, then was founding director of the Northern Kentucky University’s theater department. She recently retired as professor emerita. (See article.) Four or five years ago, when she lived near Cincinnati, she attended her first Emmylou Harris concert. It was the first time she’d seen her in person since the days onstage at UNCG Auditorium. “I went backstage after the concert. We had a big reunion, because we hadn’t seen each other in a million years.”

She has her tickets for the sold-out Emmylou Harris show Jan. 24 in UNCG Auditorium. “She is good.”

And has great memories in that grand old auditorium. “It was very exciting. My costume was gold sequins,” Forman recalls. “It was a wonderful set, great reviews, all that good stuff.”