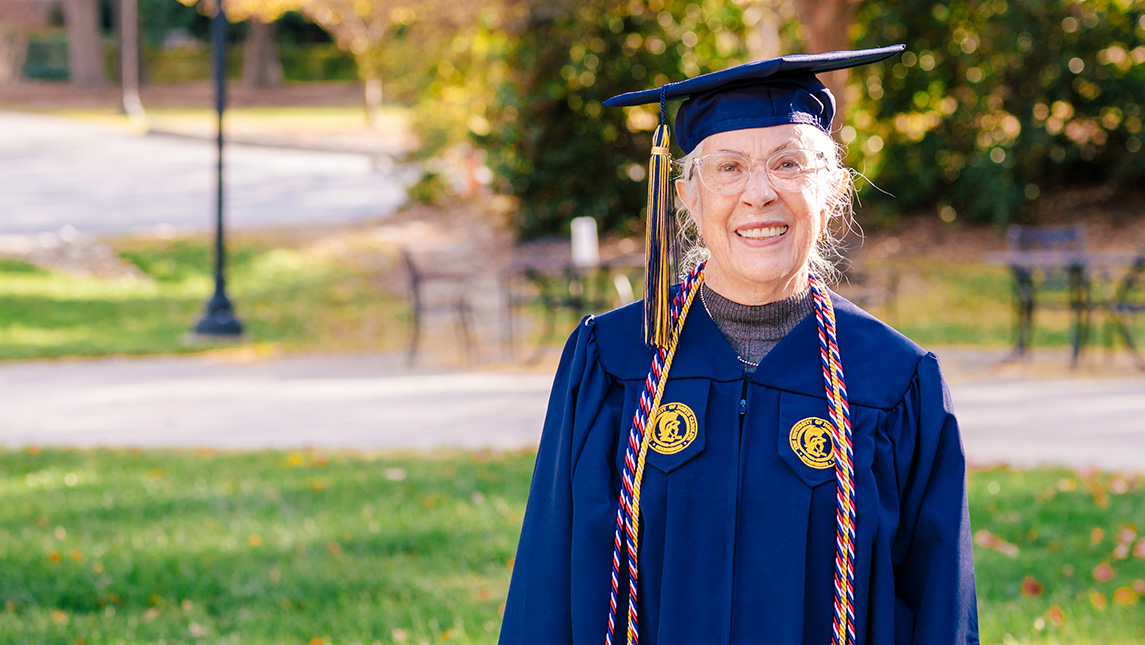 A hunger for knowledge is common in the human experience, but the circumstances and perspectives that lead us to learning are vast. Regardless of what led this term’s graduates to UNC Greensboro, celebrating commencement as one united community of Spartans is a tradition that never gets old.

On Friday at 10 a.m., UNCG faculty, students and their families will gather at the Greensboro Coliseum to celebrate its latest group of resilient graduates. This term, the University is proud to celebrate 1,486 Baccalaureate graduates, and will also award 370 masters degrees and 110 doctoral degrees. The group includes students with degrees as diverse as the graduates themselves.

Among them is a special graduate with a long history at UNCG. Eighty-year-old French major, Bonnie Miller will graduate with a B.A. in arts. Back in 1982, she earned her first degree from UNCG in social work, which opened doors to a 30-year career with Guilford County. Later, Miller worked as one of the administrative staff for the School of Languages. In retirement, she developed an interest in regaining her fluency in French from her childhood, so she enrolled in French and Francophone studies. Miller will stay with UNCG to complete her masters in French.

UNCG celebrates lifelong learners like Bonnie Miller as well as graduates who are just beginning to make their mark in the world, such as the featured student speaker, Terrance Pearson, from the Joint School of Nanoscience and Nanoengineering. The ceremony will also include the awarding of a posthumous honorary doctorate to Lorenzo “Logie” Meachum. Logie Meachum, a UNCG alumnus and former instructor in UNCG’s Department of African American and African Diaspora Studies, was beloved in the community as a leader, blues musician and storyteller.

The University’s Doctoral Hooding Ceremony will take place on Thursday, December 8 at 10:00 a.m., in UNCG Auditorium. This ceremony will feature guest speaker and doctoral graduate, Dr. Sandra Vannoy, who was named Dean of the Walker College of Business at Appalachian State in April 2022.

A livestream will be available for faculty, staff, family, and friends who are unable to attend the University Commencement in person. To learn more about UNCG’s commencement plans, visit the Commencement Central website.

Graduates are invited to share their accomplishments on social media by using related “digital swag,” tagging posts #UNCGGrad, and using Commencement-themed Snapchat filters at the Greensboro Coliseum. The University will display #UNCGGrad-tagged Instagram and Twitter posts live before the ceremony. Graduates are also encouraged to use the Commencement 2022 persona in the UNCG Mobile App.