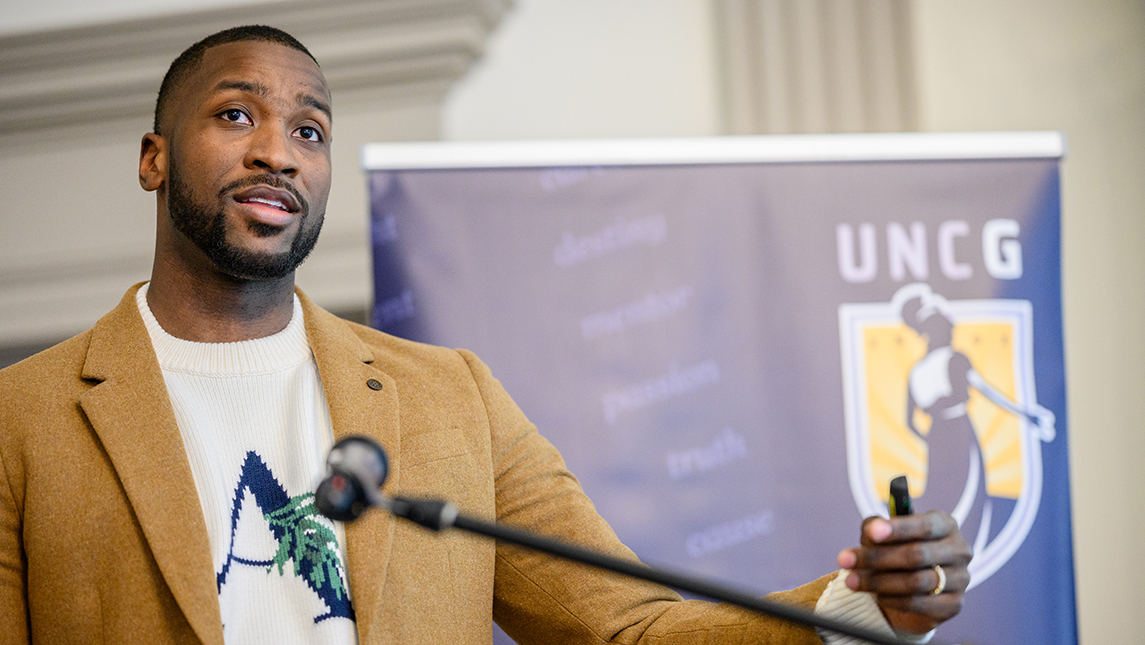 Professional basketball player Michael Kidd-Gilchrist visited UNC Greensboro’s campus on Feb. 1 to speak to students in the Department of Communications Sciences and Disorders (CSD) about his past, present, and future journey as a person who stutters. The department’s Speech and Hearing Center trains students for future careers in speech-language pathology and provides services to the community, including clinical services for people who stutter.

Before speaking to the students, Kidd-Gilchrist expressed his excitement in meeting future speech-language pathologists and getting the chance to share his personal story with them.

During the event, Kidd-Gilchrist emphasized the importance of the trusted relationship between a person who stutters and their speech-language pathologist, revealed some of the unique struggles of someone with a speech impediment, and introduced the mission of his newly launched foundation, Change & Impact, Inc.

A phrase that particularly stuck out to master’s speech-language pathology student Allison Buroker was when Kidd-Gilchrist said, “I have never met a person who stutters that is arrogant or full of themselves.”

That phrase, along with Kidd-Gilchrist’s anecdotes on his own journey with speech therapy, taught Buroker lessons that she will take with her into her professional career as a speech-language pathologist, such as not keeping therapy contained to one room and recognizing that there are an infinite number of invisible factors that impact a person who stutters.

“Our professors do an excellent job at explaining and discussing various speech disorders, however, to hear someone open up in such a vulnerable manner and provide future clinicians with real-life stories about therapy took things to an entirely new level.”

Buroker met Kidd-Gilchrist at the 2021 American Speech-Language-Hearing Association (ASHA) Convention. After learning about his story as a professional athlete with a speech impediment, she reached out to him on social media to see if he would consider virtually meeting her clients at UNCG’s Speech and Hearing Center. With a following over 180,000, she didn’t think he would see her message, but much to her surprise, he responded within the hour.

“In the Zoom meeting, he shared that he would love to meet UNCG students face-to-face because it would allow us to gain stronger connections with him. And truthfully, I believe everyone in the audience today was able to have that exact feeling of connection to him and his story.”

Kidd-Gilchrist has played in the National Basketball Association for the past 12 years. While spending time in the NBA ‘bubble’ in 2020, Kidd-Gilchrist began reflecting on his own personal journey as a person who stutters. He considered how to turn his knowledge and experience into actionable and meaningful ways to help others who stutter. In 2021, he founded Change & Impact, Inc., a stuttering initiative with a mission to improve access to health care and expand services and resources for those who stutter. Change & Impact is focused on raising awareness for stuttering, bringing together key stakeholders to improve the quality of life for those who stutter, and working on behalf of the stuttering community to improve insurance coverage for speech therapy.

“The second I met Michael, I knew he would be a wonderful leader and advocate to speak to CSD graduate students and the clients we have at UNCG’s Speech and Hearing Center,” said Buroker. “Through his words, I feel inspired to know that even though we are students, we should be advocating for those who stutter and be actively finding ways to support and raise awareness. By raising awareness and educating others, we have the potential to destigmatize communication disorders.”