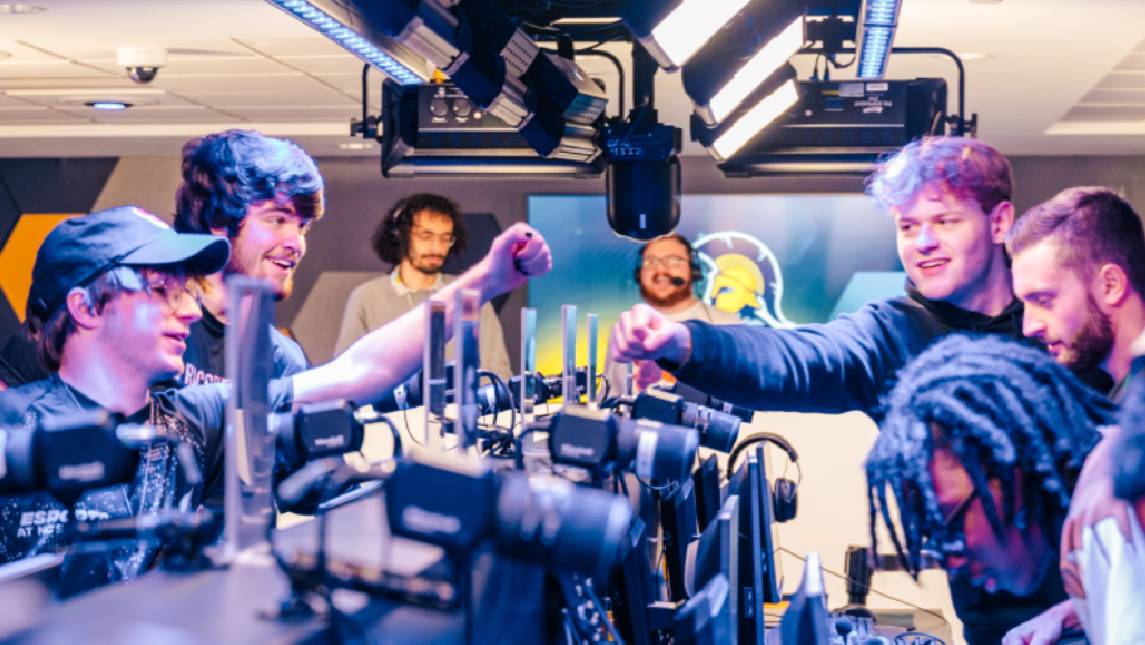 In today’s growing market of esports, video gaming tournaments are garnering viewership that rivals that of the NFL. Video gaming is no longer a newcomer to the sporting world, but rather a thriving industry with job opportunities that have grown over 100 percent since 2020.

At UNC Greensboro, the Gaming and Esports Club offers outlets for students to combine their love of gaming with academics and hands-on experience in the business of competitive gaming. On Friday, December 3rd, the club held its first collegiate tournament in collaboration with Epic Games at UNCG’s new, state-of-the-art Esports Arena and Learning Lab. Teams from NC State, UNC Charlotte and High Point University joined our Spartans for an exciting double elimination Fortnite tournament.

Avi Sukahramani, president of NC State’s Esports Club was thrilled to travel to Greensboro with his team for the tournament. “I love having intercollegiate rivalries and I love North Carolina rivalries. They’re so historic in sports already. So I want to be able to grow that in esports as well.”

As the visiting teams arrived on campus, it was clear that they were impressed with UNCG’s esports arena. “In terms of arenas in general, this one’s fantastic,” said Matthew Lilly, captain of the UNC Charlotte team. “I mean, I’m very jealous. These guys here are blessed to have a facility like this. And I’m hoping to have one at UNCC one day ourselves.”

Lilly’s team from UNCC claimed the first place finish over second place NC State and third place High Point University. Although the Spartan Fortnite team came up short, the real win was the hands-on experience our students received through working with Epic Games to help produce the tournament. From basic tournament organization, live streaming technology, shoutcasting and fan engagement, UNCG students gained a wealth of experience in the emerging esports industry and impressed the participants with their professionalism.

“The tournament ran really well.” said Lilly. “I think the broadcasting was the best I’ve ever seen, in terms of efficiency, and just getting the job done. And the directions for players were also fantastic. Overall, I have a very high opinion of UNC Greensboro.”

Sophie Priest, event coordinator of the UNCG Esports and Gaming Club, was proud to have the opportunity to manage the Spartan Invitational. “Hosting this tournament solidifies us as a competitor in the scene of esports events. And I think that’s really important for UNCG as a school that wants to have a bustling, active esports program. It puts us on the same level as other schools in the country who already have this happening.”

Tournaments like this one, combined with the draw of the arena for students who game and the university’s esports academic offerings – a noncredit esports digital certificate program as well as an esports management concentration within UNCG’s Hospitality and Tourism Management degree – are making UNCG a true leader in esports within the state and beyond. For more information on UNCG’s esports student activities and academic offerings, visit esports.uncg.edu.